Exclusive to TMD –
A bundle of 6 moving effects, smouldering, fiery, explosive eye overlays
to give a subtle or extremely bold stare to any wearer. From full on explosions,
a variety of flames to subtle rising embers and a morphing, dancing fire shape.

– 4 Eyebrow Colours.
– Browless Option.
– 4 Beards in Tintable White
– Black, Blonde, Brown, Red Hairbase Colours.
– Tintable White Hairbase.
– ‘Off’ Buttons for Hairbase and Beards.
– Shape included (head in advert is Catwa’s ‘Daniel’, works for them all but the shape was made for that.) [Demo is no mod, full version is modify]
– 6 Tones in Fatpacks (Full Range).

Exclusive to the event –
A bundle of 6 moving effects, 3 perfecct for the start of the new year with firework
themed explositions, the other 3 orange subtle twinkles. All highly modifiable, tintable,
with ‘Glimmer’ Eye system.

If you unfamiliar with these potent new eyes can read about the various features here, released in the mainstore this week – 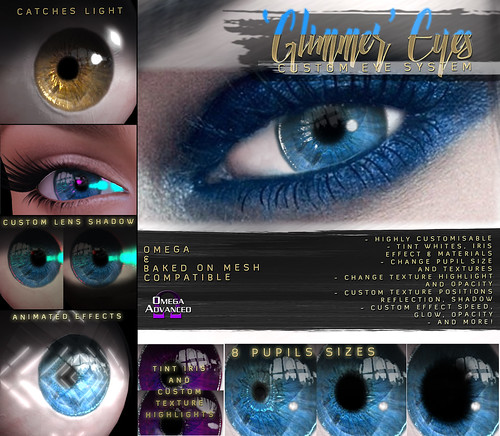 It’s the end of the decade! What better way to celebrate, remember, show off the start of the 2020 period than this animating, rotating, texture changing over-head sign.
Changes colour every 5 seconds, and it’s FREE!

!!This animation has two great new features that combine these three animations in
to a sequence!!
Click ‘Sequence’ or ‘Time Interval’ to start to repeating sequence of Bounce,
Hug, Smear animations.
‘Time Interval’ controls the speed at which animations change.
Click ‘Random’, ‘Average Time’ or ‘Time Variance to initiate a random sequence.
Animations are chosen at random, with a randomised time interval.
You can choose between 3 boob sizes (pushes boobs foreward), hand widths, and hand
foreward. (Hug animation only has two settings dictated by Hand Position Wide).
Depending on your body the ‘Stop & Reset’ button may not fully return you back to original.
Click ‘Avatar’ (Top Left of menu) >> ‘Avatar Health’ >> ‘Undeform Avatar’.
Sometimes very heavy lag can cause a delay between the boob and arm animations.
Just reclick a setting or wait for sequence to trigger a new animation and should be in
sync.

Birth is in Wanderlust sale again with an absolute steal of a skin.

Snowy fantasy themed ‘Freya’, perfect to ride out the winter season with.

I am proud to introducing a new skin : ORAZIO SKIN

Revolutionary new eye system.
Not only do these eyes GLIMMER, catch light in a variety of ways depending on the local inworld lighting,
they are also gloriously Customiseable!

Coming with a potent, fast acting easy to use hud there are so many things you can change with these eyes.

Change the materials – make them super shiny and reflecting or something more subtle.
Glossiness/ Environment settings sliders.
4 Material textures (including off).
Fullbright On/ Off

Change the opacity of the lens shadow (will make outsides of eyes catch less light though).
Highly customisable lens shadow – change height, width, position and rotation
to get the perfect shadow wrapped around your eye opening.

Change the opacity, glow and speed for the effect overlay.
With X1 and X2 for more speed or glow.
Turn off effect.

Eyes come pre-installed with omega eye scripts. Just buy router to activate and can then use the base eye layer.
[ found here <a href=”https://marketplace.secondlife.com/p/Omega-System-Kit-Just-Eyes-Customer-Edition/15405052&#8243; rel=”noreferrer nofollow”>marketplace.secondlife.com/p/Omega-System-Kit-Just-Eyes-C…</a>
or cheaper in Omega inworld store]
Another version for BOM to use the base layer included.

Super easy and quick to fit your eye size / head.

There is more in the works for these eyes already being tested
and will be rolled out. Any suggestions, feedback, ideas etc
are all welcome. Notecard Silent Alchemi.
(Updates are given out via main ‘Custom Eye System Hud’.)

– 4 Eyebrow Colours.
– Browless Option.
– 4 Beards in Tintable White
– Black, Blonde, Brown, Red Hairbase Colours.
– Tintable White Hairbase.
– ‘Off’ Buttons for Hairbase and Beards.
– Shape included (head in advert is Catwa’s ‘Daniel’, works for them all but the shape was made for that.) [Demo is no mod, full version is modify]
– 6 Tones in Fatpacks (Full Range).

Freebie every first weekend of the month @ Birth and we’re on to the next seasonally themed group gift @ Birth!

Paired with this week’s Redeux Express skin sale below it’s getting really snowy and festive
down at Birth this week.

This exclusive free version of the Glam Heels, snowy white with dabbled specks that wrap one’s feet in the iciest of fashions.

Superbly festive skin on offer for 50%, just L$175
to have ice cold ‘Snow Queen’ skin for that perfect
Christmas outfit.

Tp to Birth to nab the bargain.

Unless you live under a rock you know what weekend it is! This year
Birth taking part in the 10th Anniversary of Skin Addictions’ Black Friday
Weekend.

As well as huge discounts ranging from 25, 30%, 40%, 50% OFF! on all your favourite skins and more, we have items marked practially free at 10L, one for the women another for men –

Just 10L –
Pretty floral face makeup for Catwa for the ladies and bushy smouldering eyebrows for the guys.

“Welcome to Skin Addiction’s 10th Annual Black Friday Weekend, where participating designers have marked down select skins just for you! With a minimum 25% discount, you are bound to find your new favorite skin(s) for a great price!

[ To get discounts REMEMBER – You must first be a member of ‘Skin Addiction’, there are signs to touch to join around Birth store. ]

Tp down to Birth here –
http://maps.secondlife.com/secondlife/DLicious/91/241/21

Get the perfect booty – everything from minor adjustments to flat and extreme.

Move your bum in 100 ways up and down, foreward and back.
Rotate it in 10 angles for perfect perkiness/ droop and bootlicious thickness.

Make subtle adjustments to match your pose, or tweak
for that specific outfit and truly show off your ASSets to bewitch any onlookers.